As preparations for this summer’s Olympic Games in Rio hit a frenzied pitch, we are continuing to lay the groundwork for great travel experiences for those interested in visiting Japan for the follow-on Tokyo 2020 Olympics. Around Tokyo, construction has picked up, and now includes the significant rebuilding of the Harajuku subway station.

In recent months, we have seen the selection of the official Olympics and Paralympics Logos and the proposal of a man-made meteor shower. We expect the pace of planning to pick up quickly after the conclusion of the Rio Olympics. For comparison, tickets for this year’s Tokyo 2020 Olympics were first released in March 2015, which would correspond to ticket sales beginning in 2019. We will definitely be keeping track – there is a lot still to be decided – and keeping you informed.

New Sports Added
The IOC (International Olympic Committee) added 5 new sports for the 2020 Tokyo Olympics: Baseball/Softball, Karate, Surfing, Skateboarding, and Sports Climbing. The new sports will add a total of 18 new events for the Games. They were generally selected as sports that are popular in Japan and appeal to youth.

After the initial design was too similar to an existing logo, a new public competition was commissioned which attracted over 14,000 entries. Four entries were shortlisted and presented to the public, with the winner decided upon with voting input from the public. The winning logo by designer Asao Tokolo was announced at the end of April 2016. It is a somewhat austere navy blue and white checkered pattern, in slightly different configurations for the Olympics and Paralympics. Opinion among the Japanese public was split, with some saying the navy-colored check design logo with its roots in the Edo Period, has “a traditional Japanese touch,” while others consider it a bit somber. “I like it because it has a traditional Japanese touch as it only uses the navy color”, commented one Japanese salaryman queried. The design will be familiar to many visitors of Tokyo as resembling the checked flag known as ichimatsu moyou found along many of it’s busting traditional streets and markets.

Meteors over Tokyo
A start-up based in Japan, ALE, is proposing the first man-made meteor shower. Called Sky Canvas, the shower is generated by several micro-satellites releasing thousands of pellets that will burn up upon their contact with the atmosphere 35 to 50 miles high. The pellets travel as much as one-third of the earth in orbit before contact – and the effect is expected to be a wide-range, spectacular light show. 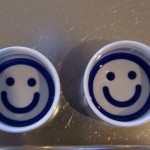 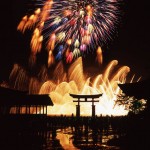