Last week was a glorious full bloom of Sakura (Cherry Blossoms) and almost everyone was out enjoying nature’s show at Hanami parties. “Hanami” literally means flower viewing and that, when done in Japan, usually involves picnicking with plentiful libations and food, with friends, family and colleagues. As we write, the glorious full bloom is being dispersed by the Spring winds and rain, creating “Sakura-yuki” or Sakura petal snow. It was a glorious bloom this year and given its popularity, never too early to start thinking about that trip for next year. With that in mind we thought we would share a few of the spots we enjoyed this year, which in fact comprise our top spots for viewing in Tokyo. As a bonus we also feature a trip outside Tokyo to the Izu peninsula…our off-the-beaten-path recommendation for Hanami and actually a year-round great place to experience. 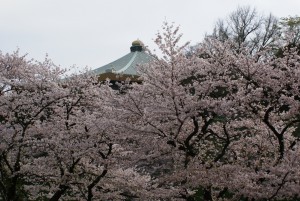 Sakura, Live at the Budokan

Places to View
There are literally thousands of great places from which to view Cherry Blossoms in Japan. Popular places in Japan for viewing include numerous parks and of course around the Imperial Palace moats in Tokyo and the Shrines of Kyoto. One of the things that makes this time of year so special is that you never know quite where you might stumble upon a cherry blossom tree in full glory. It can be tucked away in a little neighborhood, in someone’s front yard, a shock of glorious color on a mountainside, lining a local stream, or set up against a skyscraper in Tokyo. Here are a few of our favorite places for viewing Sakura in Tokyo. Most of these are very popular and hence crowded, and one of the reasons we recommend getting out of the city for a day trip to Izu. 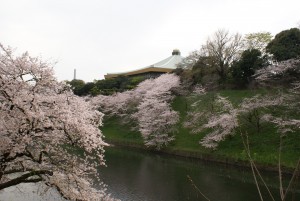 This iconic part of Tokyo is wonderfully picturesque with the Sakura at full bloom and is one of the most famous Hanami spots in Japan. Hundreds of Sakura line the Chidorigafuchi Moat on the northwest side of the Imperial Palace. Determined souls can rent a boat to paddle around in the moat to get a glorious and different view on the Sakura. Towards the end of the bloom, the surface of the water is covered in Sakura petals, adding another layer of beauty. An added bonus is that the Sakura frame the Budokan, an iconic structure in Japan and for fans of the band Cheap Trick. Expect long lines and big crowds.

Just over 800 Sakura line Meguro River near Nakameguro. They’re elegantly lit at night as part of the Nakameguro Sakura Festival. The river is more like a lazy canal, but the trees, small shops, and boutiques lend a lovely refined, picturesque and local atmosphere. It is a great place to find a yatai (street vendor) for some a nibble, a glass of sake, wine or Sakura champagne to take with you as you stroll around the riverside. It’s a wonderful area to explore with numerous fashionable shops, cafes and excellent restaurants nearby.

Aoyama Cemetery has several hundred Sakura trees that line a pleasant street that runs through the cemetery. Office workers in the area enjoy lunchtime and nighttime Hanami along the road and in the cemetery itself. It may seem a little strange to have a party amongst the graves, but Japanese honor the spirit of their deceased with objects, foods and libations they enjoyed while here in mortal form. Hanami parties are quite welcome as an homage to the dearly departed, for surely everyone, even the departed, enjoy Hanami. 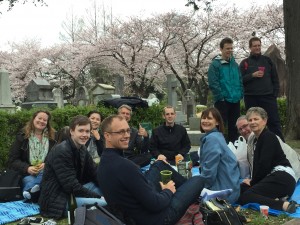 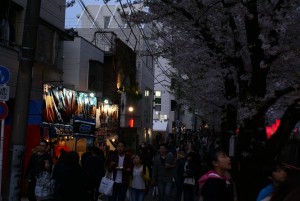 4. Shinjuku Gyoen
Shinjuku Gyoen is a vast park set in the center of Tokyo near Shinjuku with around 1,500 cherry trees. The nice thing about the park is that it is large enough that you can likely find a quiet spot, for a bit of introspection while enjoying Hanami. It is also not really a place for large drinking parties as it tends to be a bit more family oriented. Also limiting the party atmosphere is the limited open hours and small entrance fee. The park has a wide range of Sakura varieties (more than a dozen) that bloom at different times, extending the Hanami opportunities well towards the end of April.

5. Ueno Park
If you like to really party, then Ueno Park is the place to be. You’ll see huge Hanami parties throughout the large park and it is usually crowded and can be a bit racous at peak hours in the evenings and weekends. The park has around 1000 Sakura trees that line an attractive boulevard and surround Shinobazu Pond. Ueno Park’s Sakura include an early blooming variety are often the first to bloom in Tokyo, typically near the middle or end of March.

Our Recommendation: The Northeast Izu Peninsula 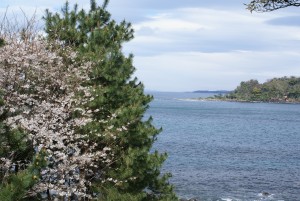 Sakura along the Izu Coastline

Get out of Tokyo proper and out into the nearby mountains for uncrowded yet exceptional mountain Sakura and Hanami opportunities. Izu is our pick this year. Only 90 minutes by train or bus, or even less than an hour by short shinkansen ride, it is a world away from Tokyo. Its geography – a mountainous peninsula with rugged coastlines to the south of nearby Mount Fuji – help it keep a low-key hideaway for a retreat for Tokyo. Great hot spring resorts abound, along with wonderful small fishing villages full of character. This year we did a simple one-night stay at a lovely Ryokan near the town of Ito where we enjoyed as the locals do, with onsens, great seafood, and lovely uncrowded and unhurried Hanami set in rugged natural beauty. 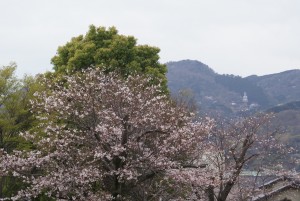 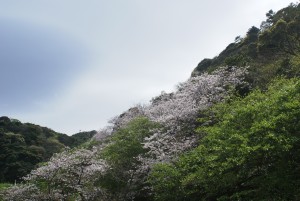 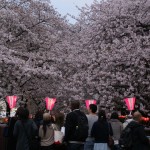 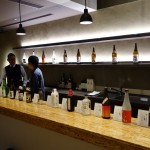 Introduction to Sake: 3 Steps to Choosing and Drinking SakeFAQs, Top Things to Do – In Tokyo