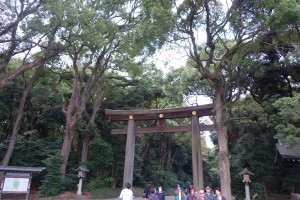 Last newsletter, we talked about traditional religions of Japan, and gave a basic overview of Shintoism and Buddhism. This week, we’re going to delve a bit more deeply into Shintoism: specifically, into Shinto shrines, and what they symbolize and then we give you our Top 3 Shinto Shrines, with a bonus pick thrown in.

Elements of a Shinto Shrine

The most recognizable design element of a Shinto shrine is the torii. The torii is a gate or archway, which marks the shrine’s entrance. It’s traditionally made of wood, and painted orange and black. On the torii, as well as other places around the shrine, such as rocks and trees, will often be a straw rope, called a shimenawa. These ropes are meant to mark the boundary of something sacred.

In front of the entrance, on either side, are Komainu. These are statues of either dogs are lions, who are the guardians of the shrine, meant to ward off evil spirits. Typically, one of the Komainu has its mouth open, while the other has its mouth closed.

Also near the Japanese shrine’s entrance is a purification trough. Purification rituals are an important part of Shintoism, because, as we discussed in the last blog, the shrines themselves are a bastion of purity. Therefore, purification must be performed before any Shinto ceremony, as well as before entering the shrine. To be respectful, ladle water onto both hands from the trough to rinse them. Then, ladle some more water into your cupped hand, and use it to rinse your mouth. Don’t swallow the water, but rather spit it out beside the trough.

Once inside the shrine, there’s a main hall and an offering hall. Sometimes these are two separate buildings. To make an offering at the offering hall, throw a coin into the box, bow twice, clap twice, then bow again. There may also be a gong, which is struck before praying, to get the attention of the kami or god who lives there.

There are also wooden plaques, called ema, on which visitors to the shrine can write down wishes, such as health and good fortune. They then leave these plaques at the shrine on an ema board, so that the kami can receive them, and hopefully grant their desires.

Some Japanese shrines even have a stage, where dance and theater performances can be seen. Noh theater, in particular, is common to see on these stages. Performers present stories from history and legend, brought to life by music and dance.

In the innermost chamber of the shrine is stored an object of worship that represents the kami who dwells there. These objects are not allowed to be seen by anyone.

So now that you know the basics of Shinto shrines in Japan, what are some good ones to visit? Here are our top 3 picks:

Meiji
The Meiji Shrine in Shibuya, Tokyo, is dedicated to Emperor Meiji, who ruled Japan from 1867 to 1912, and his wife, Empress Shoken. Both have subsequently been deified, and are the kami of the Meiji shrine.
This Japanese shrine is actually a complex of buildings and grounds, including a peaceful forest of 100,000 trees, in the heart of bustling Tokyo. In addition to the shrine itself, there’s also the Meiji Jingu Treasure House, which contains many of the emperor and empress’s personal possessions. You can also visit the Inner Garden, which contains Kiyomasa’s Well, dug by a military commander several centuries before.

Ise Grand Shrine
Within religious circles here, Ise Shrine is usually thought of as the most important of all the Shinto Shrines in Japan. In the central prefecture of Mie, and situated near the numerous small scenic Ise Islands (which recently housed the G7 Summit) lies this very large and impressive complex. It is a Shinto shrine dedicated to the sun goddess Amaterasu and is actually a shrine complex composed of a large number of Shinto shrines centered on two main shrines, Naikū and Gekū.which are about 6 kilometers apart and are connected by a pilgrimage road that passes through an ld entertainment district.

The Inner Shrine, Naikū, in the town of Uji-tachi, is dedicated to the worship of Amaterasu, where she is believed to dwell. The shrine buildings are made of solid cypress wood and uses no nails but instead joined wood. The Outer Shrine, Gekū, is dedicated to Toyouke-Ōmikami, the god of agriculture, rice harvest and industry. Besides Naikū and Gekū, there are an additional 123 Shinto shrines in Ise City and the surrounding areas.

Purportedly the home of the Sacred Mirror (“Yata no Kagami”) which represents wisdom and truth, the shrine is one of Shinto’s holiest and most important sites. Access to both sites is strictly limited, with the common public not allowed beyond sight of the thatched roofs of the central structures, hidden behind four tall wooden fences. However, visitors are free to roam the forest, including its ornamental walkways, which are extremely scenic and make for a great morning or afternoon hike. The area is dotted with hundreds tiny wonderful islands, most accessible only by boat. Many have simple accommodations, and make for a great getaway, a chance to unwind, to enjoy nature and the bounty of the sea.

Itsukushima
Located on the island of Miyajima, just outside Hiroshima, the Itsukushima shrine itself is built over the water, as is the torii, which looks as if it’s floating. First built around the sixth century A.D., the shrine was destroyed and rebuilt several times, until the current version was built, around the 1500s. The shrine is not only full of rich culture and history, it’s also an incredibly beautiful place to walk around, particularly at night, when the shrine is lit up.

Bonus: The Shrines and Temples of Nikko
There are actually two different shrines in this complex in Nikko, a small Japanese city. The Futarasan shrine was founded in 782, and honors the gods of three sacred mountains of Nikko: Mount Nyoho, Mount Nantai, and Mount Taro. The Toshogu shrine was founded in 1617, for the god Tosho Daigongen—the Great Deity of the East Shining Light. There’s also a Buddhist temple in the complex, Rinnoji. Between them, they encompass 103 buildings and other structures. The site is also an UNSECO World Heritage site.

These are just a few of the Shinto shrines in Japan you can see when you visit. Between the natural beauty, the intricate architecture, and the incredible history and culture, they make great places to visit. 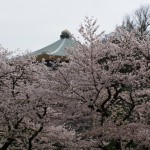 Top 5 Spots for Sakura (Cherry Blossoms) in TokyoGeneral Travel, Top Things to Do – In Tokyo 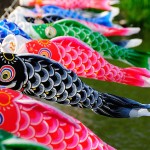 Traveling to Japan in May and Golden WeekGeneral Travel