Fun Facts About Baseball: The Great American and Japanese Pastime – Part I

I started this post a few months ago, watching the end of the 4th game of the Japan “Climax” Baseball series on TV, after having watched a one-sided first World Series game earlier in the day. The “Climax” Series pits the playoff winners of the Pacific and Central leagues, and is the Japanese equivalent of the World Series in North America. Seeing both series played on the same day, I’m vividly reminded of the differences of and around the exact same game, played in two different countries. It is a wonderful insight into both American and Japanese culture. For any fan of the great American pastime who travel to Japan during baseball season (March to October), catching a game here is a must.

Let’s start with the similarities.

The NPB rules are essentially those of Major League Baseball, but technical elements are slightly different: The Nippon league uses a smaller baseball, strike zone, and playing field. The Japanese baseball is wound more tightly and is harder than an American baseball. Runs, hits, errors, 3 balls, 2 strikes, etc….except of course in Japan the strikes come first.

Play in the Pacific League is similar to that in American League baseball, with the use of designated hitters, unlike the Central League, which has no DH rule and is closer to National League baseball.
Other similarities include a wide range (but increasingly expensive) range of tickets and of course, plenty of baseball and team-specific attire and souvenirs. Most importantly though, the biggest similarity, is that experiencing a game live in person, is HUGELY more interesting than watching it on TV.

OK, now onto the fun part, the differences.

Cheering. In Japan, this is occurs when your team is at bat, and ONLY when your team is at bat. Fanatics (literally) in the ascribed outfield bleachers will incessantly bang drums and trumpets in rhythmic fashion while the teams supporter chant well-rehearsed cheers in unison. Interesting for about one inning. I do not recommend attending a game while hungover. 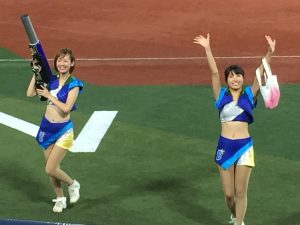 Like American Football, all Japanese Baseball Teams have Cheerleaders

Length of games – LONG. In Japan all year round, games are treated with the respect of a playoff game. Unfortunately this means many batter – pitcher stop-start mind games, and Japanese managers over-managing to exert their (un-necessary) authority over the game. Usually resulting in multiple ill-advised and game-extending pitching changes. Most games last four hours at least.

Great draft beer. And beer girls. Yes, I use the somewhat politically incorrect term beer girls because by and large, they are all girls (age 18-24 typically) who walk all around the stadium with small kegs of beer on their backs (literally) dispensing draft beers to patrons in the stands. Each main Japanese beer brand has a different uniform (my personal favorite is the Ebisu pinstripes…classy uniforms, very good beer). 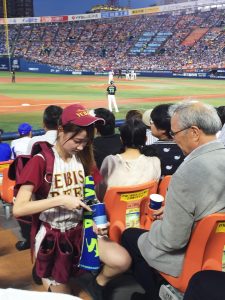 The other great thing about the fact you get ice cold draft beer poured for you at your seats is that they are also extremely considerate and fan conscious. When pouring a beer they will kneel so as to not block customers view of the game. Can you imagine that at a game in the states? Just be aware, as your humble correspondent discovered, mixing long games and cold draft beer served by beer girls can make for an unexpectedly difficult following morning.

Running for the hills when a foul ball is hit…anywhere in the stadium. True. Nothing clears the stands faster than a pop foul ball lofted into the seats. Luckily there is a group of stadium employees dedicated to blowing whistles loudly anytime a foul ball makes it to the seats, to warn fans of the impending danger heading their way (photo). 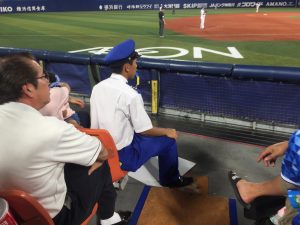 Ever vigilant whistleblower on the lookout for foul balls.

Never is there EVER a missed bunt opportunity…the love of the sacrifice perhaps harkens back to the samurai bushido code. See also, over-managing, long games. 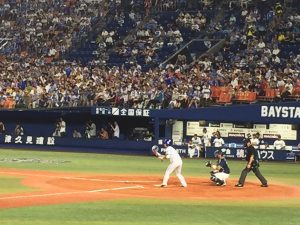 Action in motion – the beloved bunt

Separation of fans as though you’re in a Latin American soccer game. Each stadium is carefully split down the middle for fans of the home and away teams. But Japanese fans are incredibly polite. See no heckling. 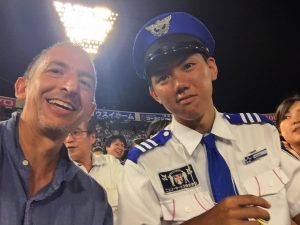 Baseball Whistle Blower. I couldn’t get a photo with a beer girl. 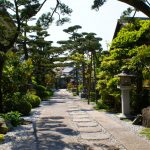 Touring the Gardens of KyotoGeneral Travel 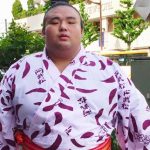 Five Fun Facts About SumoGeneral Travel, Top Things to Do – In Tokyo