Sumo is one of our all-time favorite sporting pastimes, anywhere.  And not to be missed when you travel to Japan. We tell you why in a previous blog post and today we highlight a few of our favorite and perhaps lesser known facts about the world’s oldest continuous sport. 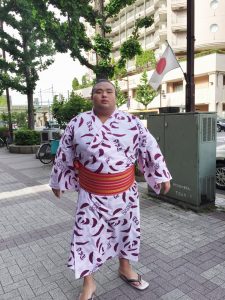 Sumo wrestlers are forbidden from driving. It sounds odd, but this is actually true. After a serious car accident involving a sumo wrestler, the Sumo Association banned wrestlers from driving their own cars….and apparently they have the power to do it. It is however kind of cool seeing these large traditionally dressed guys pop out of taxi’s or have one sit next to you on the train. 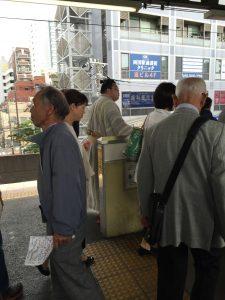 On The Subway With Everyone Else

As soon as they join a stable they are expected to grow their hair in order to form a topknot, or chonmage, similar to the samurai hairstyles of the Edo Period. During tournaments, they all have a special hair stylist who spends 10-15 minutes on each wrestler oiling and styling their hair into a symbolic Chrysanthemum shape, the symbol of the Emperor in Tokyo. The style also provides some small cushion at the start (Tachiai) when they crash into each other. It doesn’t soften the blow much, but does reduce cutting. Personally, I’m very fond of the folically challenged foreign wrestlers gamely trying to adhere to this custom. Dating myself, my favorite wrestler of this ilk was Sentoryu also known as Henry Armstrong Miller… from St. Louis Missouri. While he only made two visits to the very top division, he had one of the best wrestling names meaning “fighting war dragon”, he was won several “fighting spirit awards”, and his hair made for an interesting take on Japanese culture. Sentoryu has passed the baton (or Rogaine) over to Egyptian-born [Pictured here] Osunaarashi”, another fantastic name, meaning “great sandstorm”. 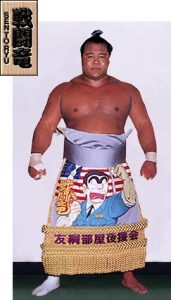 It would be easy to assume from their substantial girth that wrestlers live a life of excess outside their training schedule. In reality, sumo wrestlers’ lives are possibly the most rigidly regimented and disciplined of any athletes in the world, and life in a sumo stable is incredibly difficult. The sumobeya, or ‘stable’, is where the wrestlers live, eat, train and sleep throughout their career – unless they get married, in which case they are allowed to live in an independent dwelling. An average stable will contain around 15 wrestlers, and is arranged according to a strict hierarchy. Life is hardest for the lower ranked wrestlers, who are expected to get up earliest and cook, clean, serve food and generally wait on the higher ranked wrestlers. They even have to bathe last after training, and get last pick at dinner time. 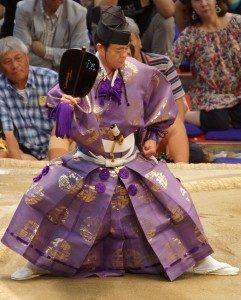 Sumo referees, or gyoji, are as interesting as the wrestlers and like the actual wrestlers, theirs is a life of hierarchy, rigidity and dedication. Like the wrestlers, they enter the world of sumo at a young age (about sixteen) and remain in their profession until they retire. They are also ranked and graded on their performance. The traditional clothing they wear in the ring is strictly graded according to rank, and as they progress up the ranks they earn honorific names by which they become known. The top ranked gyoji (the equivalent of yokozuna for wrestlers) takes the name Kimura Shonosuke but, unlike the rank of yokozuna, it can only be held by one person at any one time. Additionally the postures required of top referees leaves their ankles exposed as their elaborate kimonos give way with their movements. Both male and female fans have commented to your humble correspondent on the need for great ankles to be a successful referee at this level. 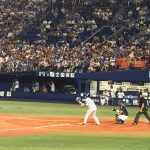 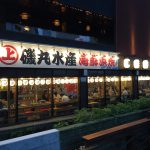 What to see and do in YokohamaGeneral Travel